Alcohol – to drink or not to drink?

Alcohol began to be produced in ancient times, thousands of years BC. Evidence comes, for example, from Mesopotamia, but also from Egypt. At first, alcoholic beverages were created by fermentation of various berries and honey, then vines began to be grown, and finally beer was produced. Nowadays, the selection of alcoholic beverages is really large, which may not be completely healthy.

The Czech Republic is one of the leading consumers of beer, with approximately 144 liters of beer per capita per year (to 2017)! Consumption of wine per capita is approximately 19 l and spirits 7 l. This is then reflected in the health of our population. There are more and more people who are overweight and obese, diabetes, liver disease (liver cirrhosis) and in combination with smoking, cancer can occur more.

It is true that some nutritional recommendations allow daily alcohol consumption – for men 20 g (0.5 l beer / 2 dl wine / 50 ml spirits) and for women 10 g (0.3 l beer, 1 dl wine, 25 ml spirits), but in the context of a healthy lifestyle and the prevention of various diseases, it is better to include alcohol exceptionally. For example, during birthday parties, weddings, etc. If you decide to indulge in a glass, choose drinks with a lower alcohol content (low-percentage beers) and a lower sugar content (preferably dry wines). Hard alcohol is mostly mixed into drinks, so you can intake more energy and sugars from juices, cola drinks, and this is again not ideal. 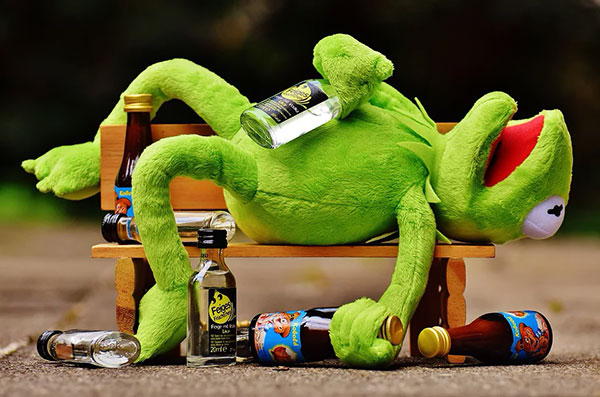 Alcohol is very energetic – 1 gram of alcohol hides 29 kJ (7 kcal) of energy, which is more than, for example, 1 gram of carbohydrates or proteins (17 kJ / 4 kcal). So if you indulge to yourself 4 pieces of 12° beer in the evening, so you drink 2 liters of beer, you will receive as much energy in a relatively short time as if you just had a big portion of sirloin with dumplings. So it often happens that sober evening drinking increases the daily energy intake 1.5–2 times, which the body then stores in fat mass, because at ten p.m. you probably won't go running a half marathon. Not to mention that you like to eat pickled camembert, pickled sausage, or go to a fast food, which is a big calorie charge for the body.

If you are trying to reduce your weight, the basis is always to abstain from alcohol. You will not consume an excessive amount of energy and alcohol will not inhibit your weight loss or impair regeneration after sports.

In short, it is no sin to indulge in a glass of alcohol at a social event once in a while, but daily consumption is not entirely appropriate if you are trying to live a healthy life and keep fit.

As always, thank you for the continued excellent service. We are extremely satisfied with our daughter's care at ATODA, and I have recommended your clinic many times to other families.
Alicia Juhl
Other ratings